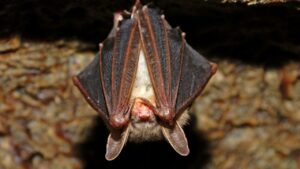 The Repechón caves open on the Amazon slope of the Eastern Andes, 11 km southwest of Villa Tunari, in the Chapare

The “Cavernas de Repechón” Wildlife Sanctuary is located in the Carrasco National Park, a protected area in Bolivia that has a large number of species, with the Chiroptera being one of the best represented groups within its limits. The Sanctuary was created more than two decades ago to protect a cave system that is home to several species of bats (Siles, 2002). The species of bats that inhabit the caves are vital in the area for the maintenance of ecological processes such as seed dispersal (Morales 2006, Barboza and Aguirre 2010) and pollination. This complex of caves is used as part of a tourist circuit, an activity that has a direct impact on the bats that use the caves as a refuge. On the other hand, human activities in the area are causing a negative effect on the Chiropteran communities in the area, which makes the Sanctuary a very sensitive site and vulnerable to disturbance (Vargas et al. 2008). Although no threatened species have been recorded in the area adjacent to the Repechón Caverns, there is a high probability that Vampyrum spectrum, Trinycteris nicefori, Anoura cultrata and Platyrrhinus albericoi (species categorized as Vulnerable in Bolivia) are present in the Sanctuary area. .

The effects of anthropogenic hedges on natural ones resulted in a semi-natural mosaic, consisting of patches of habitats with different levels of disturbance. The intensification of human actions on the natural ecosystem has reached unprecedented levels to the extent that it has been recursively suggested that the massive modification of natural habitats in small and isolated fragments is the major cause of species extinction.

Sonandes is a platform dedicated to the promotion and dissemination of contemporary sound practices, bringing together creators who research, develop and exhibit projects associated with sound and listening. It promotes production and research as a way of knowledge and collective thought. It promotes the creation of specialized exhibitions on sound art and the study of the senses, values​​international cooperation and the importance of forging a culture of listening.

Since 2014, it has developed a multidisciplinary work and carries out meetings and activities such as: Sonandes International Biennial of Sound Art, Puertos: Creation Residencies Program, Laboratories and Publications.